Weeds are sneaky. They start off unassuming, a small seedling, a single tree, an isolated vine. At these early stages it’s often hard to even notice them, let alone recognise the potential for destruction that they can wreak. They don’t seem to be doing much, or going anywhere. It is often not until weeds have really started to take over, and there are huge volumes of seed being produced, that we can clearly see the problem. At that point it is much harder to do the control. So much better to tackle them before they start to dominate, when they are in the establishment phase. For that to happen people need to be able to recognise the weeds and the threat early.

A great example of this is tree privet. Further north on the peninsula, there are areas where tree privet is becoming the dominant vegetation. We are seeing a higher level of awareness and action from landowners in this area (Zone 4 on the map) as they experience first hand what tree privet can do when left to its own devices for a while. However as you head south, there is less and less tree privet in the environment and the risk is less apparent – but don’t be fooled, without action, this is only temporary – just a quirk of time and distance form the original seed sources. If all landowners in these areas can recognise these time bombs ticking away and tackle these more isolated plants early, we could prevent that future problem, and create a protective buffer of land free of tree privet free around Manaia and Te Whara, Bream Head. The benefit of acting early is exponential, especially if everyone around you is doing it too.

We currently have the first phase of a strategic project underway, directly contacting and helping landowners to targeting tree privet and elaeagnus in Zone 1, with the goal of controlling every known plant, but we want to support landowners all over the peninsula to take action. 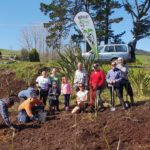 While New Zealand remains under Alert Level 3 restrictions for Covid-19, we are adapting our services to ensure public safety is of the highest priority. For services that usually would require close contact, such as the distribution of herbicide and equipment for weed control, we have adjusted our process so we can eliminate physical distance […]