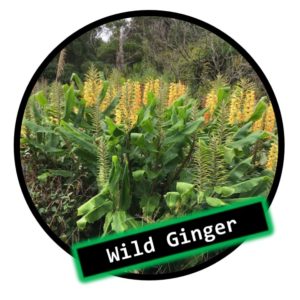 Why is it a problem

Wild ginger is shade tolerant, long-lived and  fast growing. Eventually replaces all other species as nothing can grow up through the dense mats of tubers it creates, and the dense leaves block light and smother native plants preventing regeneration. The rhizome beds , while they can be deep themselves, are shallow rooted, so when they become heavy with rain they can slip on steep sites and stream banks, causing erosion. Spread easily from birds eating the seeds, and by fragments of rhizome which can survive immersion in the sea, crushing, and years away from soil.

Sets more seed in open light-filled areas, but also readily grows under forest canopy, where it expands outward, eventually opening up the canopy above it. Large risk in lowland broadleaf & kauri forest.

How does it spread?

Seeds are spread by birds and possibly possums. Rhizomes spread slowly outward from clumps, and new plants are established from rhizome fragments spread in dumped vegetation and fill, and by soil movement, flooding, and contaminated machinery.

How much of it do we have on the Whangarei Heads Peninsula?

Wild ginger is increasingly common in Whangarei Heads. The area around Taurikura ridge, Mt Manaia and Mt Aubrey are a particular hotspot, but it is a problem all over the Heads. However, for the most part we do not yet have the extensive fields of wild ginger seen further north, but will do if we don’t act to control wild ginger now.

What can we DO about it at Whangarei Heads?

Fortunately, it is reasonably straight forward to control, and it can be done very successfully with minimal herbicide use. The initial priority would usually be to control the sites in the open to reduce seeding, and then tackle sites in the bush. The higher volume of seed from sites in the open and its dispersal by birds means that controlling that piece in your own backyard is more important than you think.

Seeds are relatively short lived – approximately 6 years, meaning it is possible to eliminate this plant from a site relatively quickly.

Check out the control methods below:

How do I control it?

Special disposal notes: Rhizomes extremly hardy.  For manual control methods dispose of rhizomes in landfill, or by drying out and burning. Stems can be composted.

Seeds are relatively short lived – approximately 6 years, meaning it is possible to eliminate this plant from a site relatively quickly; Maintain a rolling front. Check and treat area every two years before seed set (May). Don’t replant sprayed sites for 6 months/ until seedlings appear naturally.

CAUTION: when using any herbicide or pesticide PLEASE READ THE LABEL THOROUGHLY to ensure that all instructions and safety requirements are followed. 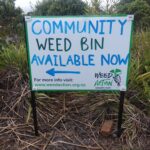 * Note; this service is available to Whangarei Heads Residents only* Weed Action is trying to make it as easy as possible for you to take action against weeds. Following the success of our previous weed amnesty initiatives, here’s another to help motivate our community. After all, what better time is there than NOW to […]