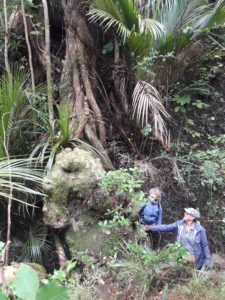 With the funding Chairperson Robyn Bigelow & dedicated volunteer Jenny Lawrence gained for Weed Action Whangārei Heads from the Department of Conservation’s Community Funds last year, we were able to engage our community to establish a passionate group of volunteers to combat environmental weeds at Bream Head/Te Whara. Led by two motivated environmental champions: Mike Urlich & Adam Willetts, the FORT (Forest Recovery Team) launched into action on Sunday the 19th of July with many weeds controlled, but perhaps more importantly, the seed firmly planted to keep the momentum going within our volunteer base/community. Weed Action will strive to keep reaching for the funding that is so vital to turn the tide of biodiversity loss, especially forested areas of natural ecological significance such as Te Whara. Below is the summary report from the successful launch: 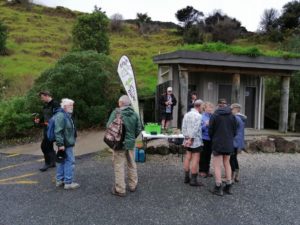 Despite being on the back of a 500 year downpour this weekend we had a good turnout and a total of 9 people committed to some mahi to protect the forests at Bream Head from invasive plant species.  Some solid work effort in the bush and scrub above the Smuggler’s Bay carpark in Whangārei Heads area took out all saplings and seedlings of 10 weed species across the worked area and this completes the first phase of control of getting rid of all the mature seeding plants as well as juveniles that will seed in the next year or two. 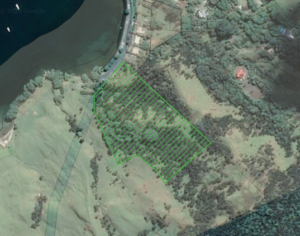 The constant drizzle seemed to stop for our working bee at 9am and Bream Head Ranger Adam Willetts gave a brief talk on the importance of weed control in maintaining native habitats in Bream Head and the other conservation land within the Whangārei Heads area.

After the health and safety briefing the group swept up the creek and flanks of the hill in some quite varied and beautiful native forest including regenerating kanuka scrub. We covered a total of 3 hectares and controlled 12 exotic species having significant impact on native flora at the site. Most ubiquitous was queen of the night followed by woolly nightshade and brush wattle. Over 800 individual plants were cut and treated by the group. 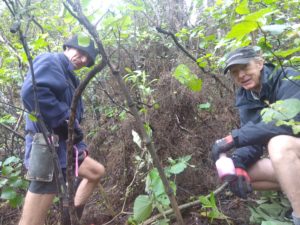 Weed Action & Bream Head would like to thank all who attended and made this such a successful working bee. Thanks to Marc and Jenny Lawrence with big help on the set up as well as mahi on the ground. This was an experienced group of weed warriors but it was still a surprise to cover that much ground within two hours only. Thanks to other keen  FORT workers Phillip King, and Peter Coates and Russell Hohmann.

We look forward to making more great inroads at next month’s working bee on the 16th of August- location yet to be determined.

Please contact Adam or I (Mike) if you wish to join the F.O.R.T in protecting the special forests at Bream Head- Te Whara at next months working bee. 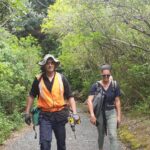 🎯 ARE YOU OUR NEW PROJECT COORDINATOR?🎯   ⏱ 20 – 30 hours per week 🌿 The best office in the world 🌏 Passionate tight team to work with ✅ First-rate remuneration 💪 Be a hero at the heart of the community   ➡️ Restore our stunning but weed burdened ecological habitats ➡️ Manage WANHRT’s […]